From Zero to Miso Soba in Under Ten Minutes

Whether it is for breakfast, lunch or dinner, Miso Soba has a way of hitting the spot, and all the ingredients are available right in our neighborhood, mostly at Chang-Li Market. Here is a quick way to prepare a 4-cup bowl of miso soba, in under ten minutes. That's a full meal. Make some salad for an appetizer, and you're living like a king...

Here is more or less all you need, in terms of traditional ingredients, clock-wise, starting in the upper left, dried Shiitake mushrooms, Soba Noodles, Hijiki, Organic Red Miso, Bonito shavings, and dried sardines.
For today, we will assume that the Dashi, the soupstock is already made, and another time I will write about how to make it both the traditional way and the vegan way. I often make Dashi for the week.
For vegetables a good choice is daikon radish, and some scallions (2-3).

Use a 2-cup and a 1-cup Pyrex measuring cup. 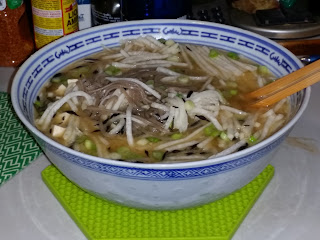 Voilà, you now have a 4-cup meal-size miso soba. You can tweak the taste with some tamari or some Bragg's Liquid Aminos (Chang Li carries it, and it has less sodium than low sodium soy sauce, plus it is healthy as all get out).
Posted by RogierFvV at 2:26 PM No comments:

My search for the perfect, healthy drinking water may be over... Living in New York City this is a challenge, since we have fantastic drinking water that is poisoned with hexafluorosilic acid for water fluoridation - the result of one of the biggest scientific frauds of the 20th and now the 21st century.

The current epicenter of the battle against mandatory water fluoridation is now in Ireland, in the work of environmental scientist Declan Waugh, who has just published a major paper on fluoride in tea, and who the accumulation of fluoride in tea, combined with fluoridated water results in a tremendously toxic brew... Meanwhile, the country of India is spending hundreds of millions on getting naturally occurring fluoride out of the water, because millions in that country are suffering from fluorosis. In short, any informed person would avoid fluoridated water. Most of Europe has long since abandoned it after it was understood in the seventies that this particular American fad was a complete scientific hoax, and caused more health problems than it solved. Even the CDC published a report that fluoride is toxic, and protects teeth only by topical application, not by systemic application (ingestion). Incidentally, as far as tea is concerned, the other major contaminant is aluminum, especially in green tea, and that is no joke either.

In 1999, when I worked for a company called Better Health Labs, I introduced fluoride filters in our product line, and that was a solid success. The problem was that filtering out the fluoride was tough to do, and the only good fluoride filters required permanent or semi-permanent installation. None of the ever popular filter pitchers take out fluoride, even if they are otherwise OK - and many of them are relatively ineffective.

The picture has changed. For a few years now, I used the ZeroWater filter, and added Concentrace Mineral Drops, because the body needs the healthy minerals (electrolytes). For my freshwater aquarium water I still use the ZeroWater filter, and add the necessary minerals. However, more recently I have found a better solution, the Clearly Filtered pitchers, they are marketed both as the Perfectwater Purifier, and on Amazon as the Aquagear water filter pitcher, and possibly under other private labels. You can find a full analysis of the performance of this filter on the Clearly Filtered site, and it is impressive indeed. This pitcher claims to reduce fluoride by 90% and the test report from the Environmental Toxicology Bureau of the LA County Department of Agricultural Commissioner/Weights and Measures confirms it.

The Scoop on the Clearly Filtered pitcher

The test results are without a doubt the best I have ever seen for a domestic water filter, and certainly a pitcher. This filter really takes out the bad and leaves in the good. Since it is marketed under private labels. I got the filter from Perfectwater Purifier, but if I had to do it over, I would probably buy it from Amazon under the Aquagear label, or direct from Clearly Filtered. Here's how the deals compare:

Regardless of which one you buy, let's look at the water quality. I did some of my own testing, based on my experience in this area:

The test report on this filter documents that it is extraordinarily effective in taking out the bad, and leaving in the good. I measured the mineral content with my trusty TDS meter, and indeed, I got scores in the 150-175 range, a tad below my tap water. I have also been measuring the ORP (Oxydation Reduction Potential), and generally it seems to be in the 40 range, which is very low, much better than the tap water, which tends to have an ORP of 200, and this measurement alone confirms that this filter is indeed remarkably efficient at "taking out the bad," as well as "leaving in the good."

I have also measured the pH, and it is above 8 - my pH test kit covers only the 6-8 range, so I don't have more precision but "above 8." Nevertheless, this is sufficient to compute the Relative Hydrogen Score (rH) of the water, which is a better indicator, because it makes the difference between anti-oxidant healing water, or just plain tap water, which increases oxidative stress. The rH scale says that water with an rH below 28 has dissolved atomic Hydrogen, and therefore is effective as an anti-oxidant. My measurements of the water from the Clearly Filtered pitcher have been in the rH of 25 (or less) range.

In addition to using the filtered water from the Clearly Filtered water, I now use alkaline mineral sticks (see my previous post) in my drinking bottle, and that lowers the ORP further to between -40 to -80, and thereby the rH improves further to about the 20-25 range. In short, these alkaline mineral sticks do seem to work to improve the presence of dissolved Hydrogen content of the water. Over time I intend to try various different sticks.

Newer research is pointing in the direction that dissolved molecular hydrogen is really the key issue. A researcher by the name of Tyler LeBaron runs the Molecular Hydrogen Foundation, and you can find the core science on molecular hydrogen here, and here is a YouTube video of his presentation to a medical conference in Las Vegas at the end of 2015.

I was involved in the past with Water Ionizers, also known as Reduced Water Machines, or Electrolyzed Water Machines, and many other names. For a long time they reigned supreme in producing healthy drinking water, but we've gone past that now. These machines always had the problem of fouling of the electrodes, and eventual failures, even if some were better than others in self-cleaing of the electrodes. Since the research has pointed to the fact that it is really free molecular Hydrogen that matters in creating the anti-oxidant effect in water, there are now new machines coming to market that produce water with very elevated dissolved Hydrogen. They are called Hydrogen Induction Machines, or HIMs.

Here are some more sources of information:


Also there are hydrogen rich water products coming on the market, such as H2Bev, and finally, there is now a simple test to verify the amount of dissolved hydrogen in water, H2Blue.

It seems to me that this technology is poised to overcome all of the problems with water ionizers. Having said that, it may be somewhat superfluous if a simple water filter, like the Clearly Filtered pitcher, and possibly aided further with the alkaline mineral hydrogenation sticks, can produce such powerful results, so you can be drinking anti-oxidant water on an ongoing basis. The times they are a changin' !!!

For more information, it is worth checking the articles about Hydrogen Rich Water on Google Scholar.

Posted by RogierFvV at 7:07 AM No comments: