Next up a version of the soup with Cranberry beans, and this became a research project all its own, for these are known by more names than I'd care to shake a stick at - in some cases these might be local varieties that are closely related but the naming gets quite confusing: 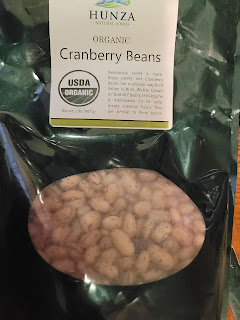 Take your pick whichever name you will prefer, but stores may know it by one name and not the other, depending on the ethnicity.

Keeping the recipe constant and only varying the beans is easier in theory than in practice. Sometimes you cannot get all the ingredients, and sometimes it is just the urge to improve on something. Here is this week's list:

===the substance===
1 lb cups of red kidney beans (or pinto beans, or borlotti beans aka cranberry beans, or Dutch Bruine Bonen), dry
1 strip of kombu for soaking overnight
1 tbsp summer savory for cooking the beans
12 Oz block of baked seitan (kao fu) or alternatively a cup of TVP (Soy chunks).
1/2 lb of barley
===The Base===
1 tbsp of Tianjin vegetables
3 medium size yellow onions, cut-up fine
3 shallots or other small onion
6-10 cloves of medium sized cloves of garlic, minced
1-3 toes of turmeric, minced or 1 tbsp of turmeric powder3 sprigs of fresh thyme
1 cup water with 1 tsp of Yondu for sautéing the onions and peppers
2-3 Thai chili, green
1-2 jalapeños, cut-up fine
1 green bell pepper
1 tbsp of ground annato seeds
===The Veggies===
1 leek, washed and sliced fine
3 bay leaves
1 cup of eddo.
3 stalks of celery, including leaves
2-3 red skin potatoes, washed and diced,
2-3 carrots peeled & diced
other root vegetables as might be around, turnips, parsnips, etc.
2 tomatoes, or a 15- Oz can of diced tomatoes
3 sprigs of thyme, fresh if you can
1 quart of vegetable broth
1 quart of water with Vegetable Better Than Bouillon
1 tbsp of either miso or gochujang at the end to finish the taste mild with miso or hot with gochujang
Note: no Seitan this week, so I used TVP instead (Soy chunks), also I added a parsnip, which I did not have last week, as well as some crushed/ground annato seeds for flavor and coloring.

One thing I learned is that it works best to purée half the soup after it is cooked, cooking it after it is partially puréed tends to cause settling and potential burning at the bottom.
I think I like it best the purée about half the quantity, so that you have good substance, but you can also still recognize the beans.
The process really naturally falls into three steps, and I use two pots in the process, which also serves at the end to separately finish a mild and a spicy version of the soup.
That is really all there is to it.
At the end I split it in two, first to purée one half with an immersion blender, and next to finish one half mild with some miso dissolved in a cup of water, and the other half spicy with some gochujang, likewise dissolved in water.
Posted by RogierFvV at 7:59 PM No comments:

This is the next installment of my Bruine Bonensoep Fusion project, and today it is time for the Pinto Bean variety. 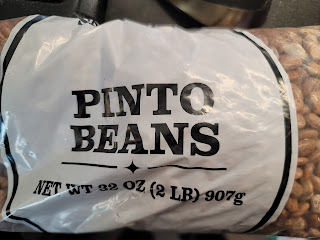 I am making a minor tweak to the recipe, for some folk are very sensitive to hot spices like Thai chili peppers and jalapeño peppers, so I am toning that down. In other words, where it says 2-3 Thai chilis, I am now using 2 and where it says 1-2 jalapeños, I am now using 1. This will leave just a hint of spice, but then if you finish a batch with gochujang, you can satisfy the people who like hot and spicy, whereas finished with miso it can satisfy others who like things mild. One of my taste testers is a typical example. The husband likes it hot, the wife likes it mild.
In all, I found that I have a slight preference for the Pinto bean version, but only slight. I'll be curious to see how murky the picture gets after I do the Cranberry beans next weekend.

One major difference I created this week was that I made it more chunky style, as opposed to entirely smooth. Once I combined the sautéed onions and pepper with the beans, I puréed only 2/3rds of them and left the other 1/3rd in tact, plus then I also lefft the veggies in tact, as I did not use bhe blender again.

1 lb cups of red kidney beans (or pinto beans, or borlotti beans aka cranberry beans, or Dutch Bruine Bonen), dry
1 strip of kombu for soaking overnight
1 tbsp summer savory for cooking the beans
12 Oz block of baked seitan (kao fu)
1/2 lb of barley
3 bay leaves
1 tbsp of Tianjin vegetables
3 medium size yellow onions, cut-up fine
3 shallots or other small onion
6-10 cloves of medium sized cloves of garlic, minced
1-3 toes of turmeric, minced or 1 tbsp of turmeric powder3 sprigs of fresh thyme
1 cup water with 1 tsp of Yondu for sautéing the onions and peppers
2-3 Thai chili, green
1-2 jalapeños, cut-up fine
1 green bell pepper
1 leek, washed and sliced fine
1 cup of eddo.
3 stalks of celery, including leaves
2-3 red skin potatoes, washed and diced,
2-3 carrots peeled & diced
2 tomatoes, or a 15- Oz can of diced tomatoes
3 sprigs of thyme, fresh if you can
1 quart of vegetable broth
1 quart of water with Vegetable Better Than Bouillon
1 tbsp of either miso or gochujang at the end to finish the taste mild with miso or hot with gochujang

I also added in a turnip this week...

Update on the bean counting

Meanwhile, I continuied my research on beans... All in the interest of science, shall we say.

Posted by RogierFvV at 11:08 AM No comments:

After checking with some Dutch contacts online, there was disagreement if Dutch Bruine Bonen are most closely approximated with red kidney beans, or pinto beans, or some other kind of bean (somebody came up with a wild suggestion, about a bean variety I never heard of, borlotti beans, which I may also try), ideally, of course you would make it with Dutch Bruine Bonen. It should be noted that in Holland Bruine Bonen Soep is enough of a phenomenon so it has it's own website.

Anyway, my purpose no longer is to approximate my mother's recipes. My cooking has evolved over time, and it is now just a matter of improving the recipes. This time around, it will be a battle of the beans, between red kidney beans and pinto beans.

This first go-around will be with red kidney beans. 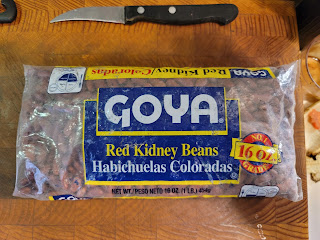 To make the comparison meaningful, I will standardize the recipe exactly. This is the beginning of #WFPB soup science.

To finish: some miso (mild), or gochujan (hot), dissolved in a cup of water.

Meanwhile, I did some research on beans... All in the interest of science, shall we say. Meanwhile, to satisfy the bean counter in me (after all, I am Dutch), I had to figure out the prices:

Next week, we'll do it again, in exactly the same way, except with Pinto beans.

Posted by RogierFvV at 10:53 AM No comments: 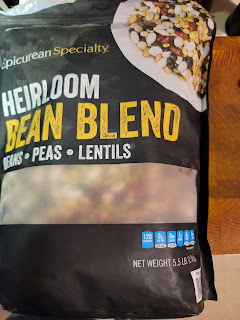 1 lb of any version of mixed soup beans, I used this heirloom bean blend, but you can get packages of 13 or 16 bean soup mixes.
1 piece of Kombu for soaking
1 tsp summer savory
8 cups vegetable stock (or 4 cup water, 4 cup stock or all water!)
2-4 onions, chopped yellow or Vidalia onions are great here
1 tsp savory
4-8 cloves garlic, minced
3 chilis minced
1 jalapeño minced
1 red bell pepper, seeded and chopped
2-3 stalks celery with tops, chopped
2-4 carrots, peeled and cut-up
1 tbsp of Tianjin vegetables
1/2 tsp of ground red pepper
2-3 dried bay leaves
2-3 sprigs of fresh thyme
small bunch of parsley, chopped and be added in the soup at the end, or added as garnish later.
1 14.5 oz can of diced tomatoes, undrained
juice of 1 lemon

OPTIONALLY: other veggies as available, root vegetables such as parsnips, or taro (aka edo, or coco), turnips, ginger, fennel, celeriac, turmeric, potato, rutabaga, can also add in a green veggie like poi leaf or callaloo for the last 5-10 mins.

This time, I had poi leaf (Malabar spinach), taro, a large winter carrot, turnip. and mix of various peppers, not just one red pepper.

Soak the beans overnight, and pre-cook them in an Instant Pot for 15 mins. 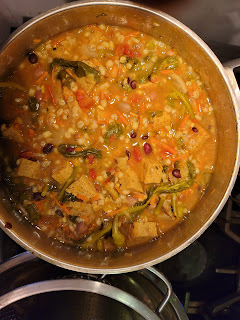 In a separate pot, cook the onions with the garlic, peppers, turmeric, celery, herbs and spices. Stir frying until they are soft, add water as needed. I used a cup of water with a teaspoon of Yondu.

Add the carrot and root vegetables, and the veggie stock - if you use water, you'll need something else for flavor, like Better than Bouillon or miso.

Let it simmer for a half hour and then add the green veggie. I used Malabar spinach this time.

Evidently, you can fine tune just how hot and spicy you want it.

Posted by RogierFvV at 2:11 PM No comments:

This time, I improvised a little further:

You can obviously enrich this soup many different ways. I added one king mushroom, with the onions, garlic, at the outset. I use savory mostly in any dish that involves beans. I also cooked both the hominy and the beans with a piece of kombu.

Adding some Yondu in the stir-fry at the outset is one of the steps that increases the depth of the flavor. In my soup stock, this time I used one quart of store-bought veggie broth and one quart of water with about 1.5 tbsp Better Than Bouillon. 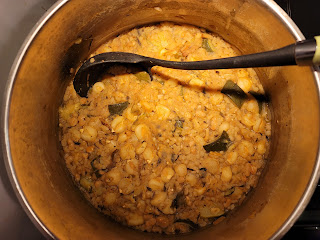 Posted by RogierFvV at 1:27 PM No comments:

This recipe was developed based on an online cooking demo by Yondu. It really proves the versatility of Yondu, which evokes a naturally aromatic flavor from veggie dishes like nobody's business.

The version that was presented in their online cooking class for meatless Mondays used EVOO, which is generally assumed to be healthy, but we know better, so in this version, I eliminated it, but in the process I think I proved the versatility of Yondu even more.

Quantities in this example are for 2 people.

8 Oz Whole Wheat Pasta, or whatever other type of whole grain pasta you desire. 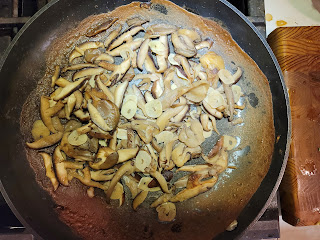 Here you can clearly see the mushrooms cooked dry, and a rim around the pan which is really Yondu with essence of mushrooms, so you can scoop out the mushrooms and garnish them, meanwhile reusing the same pan for the veggies, and de-glazing it first. 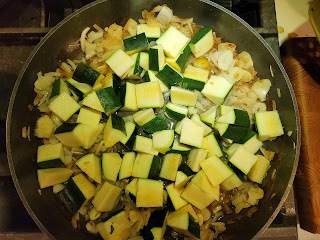 Meanwhile, while you are cooking the veggies, boil 8 Oz of spaghetti, or linguini and make sure you keep the cooking water at the end. 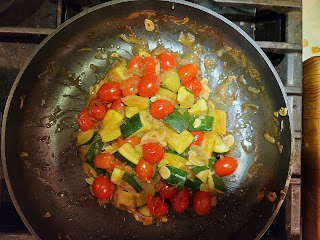 Posted by RogierFvV at 4:39 PM No comments: 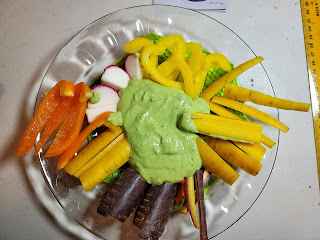 Put the ingredients together in the bowl of a small food processor and blend together, voilà it's done. Finger licking good. Serve with some favorite raw veggies.

Recipe came from a Yondu cooking presentation, I just got rid of the olive oil... rest is the same as they did. You need to make sure you add the water in the food processor bowl, this is too heavy to process dry.

Posted by RogierFvV at 5:35 PM No comments: