As I have been discussing serious oatmeal with some people, I will share my process here...

First, this was today's version:

I usually prepare Oatmeal for two days at a time. I take one measuring cup of steelcut oats (I get them from ShopRïte, at $3.29 for 30 Oz of organic oats), and prepare it overnight in my trusted Zojirushi NP-GBC05 rice cooker. It is ready for me at 6:30 AM with the timer.

The daily plate of Oatmeal

Then I save half for next day and I serve the other half, fixed up as follows (in this case):
And here is another version:


A note, you do not want to O/D on Omega-3. Too much is no good, what matters is the proportion between Omega-3 and Omega-6. Personally, I use 2-3 tbsp a day of hemp seeds, milled flax seed, or chia seeds. That seems to be about right for me. Individual mileage may vary, so consult with your plant-based doctor at the time of your physical ;-)
Posted by RogierFvV at 5:11 PM 1 comment:

Another Bengali Meal Prep in September

Bengal cuisine offers such rich possibilities for cooking with spices more than salt.

Today's cooking class was another lesson in a @WFPB version of traditional recipes.

We start with Brown Basmati Rice, which was cooked in advance with a Zojirushi NP-NVX18 Rice cooker on the GABA Brown Rice setting, meaning it is germinated brown rice, that germinated for 2 hours at 105F and then cooked under pressure with an Induction Heat system. 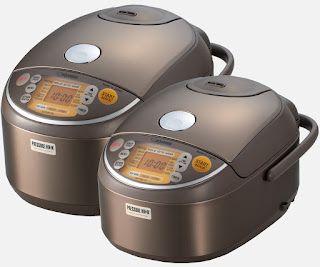 Our new friend from Queens, Katerina from Queens was there once again. Somehow we lost count, because two people could not make it in the last minute, and we ended up inviting other people in the church to share our meal with us, and a good time was had by all. Not to mention many of us ended up taking more home with us.

The first steps are actually the same for both dishes, so we made a large batch of onions, and then split them in two and put on the vegetable medley first, since it needs a longer cooking time.

No, dal is not an airline. It is the typical sauce made from lentils, and you can consider it a soup or a sauce, depending on the occasion. Any three green leafy veggies will do... according to the season today we picked this:

For the first step, see above about caramelizing the onions, again we did the onions once for the two dishes and then split them up.

We added water to the caramelized onions

We had young baby spinach, so we did not need to cut it. The callaloo and Poi Leaf we cut in about 1" lengths.

There were grapes for desert. Unfortunately, our friend Khokon unexpectedly could not make it so we will have to do it again and learn to do it even better, but it was a good lesson in a basic dish that you can vary almost endlessly according to the season.

If the group had been bigger, we would have made a salad. The plan was for spaghetti salad from green papaya, carrots, daikon, and zucchini, with a 1/2/3 ddressing (1 measure maple syrup, 2 measures dijon mustard, 3 measures maple syrup) with lemon and lime, dill, parsley, pepper. That 's an invention of Shamim, who is Khokon's cousin and sometime chef.

Practicing plant-based on a budget:

We always donate the overage to St. Helenas, and this week it was almost half of the money we collected. We spent about $8 per person, so our donation to St. Helena's is $7 per person this week. If we had made the vegetable spaghetti salad, our spend per person would have been $10 or so.
On top of that several of us took leftovers home and we actually fed 10 people not the five people who signed up in the class, for some of the other staff and one of the priests joined in. Or rather they were not given the chance to leave without eating for we had more than we could handle.

These numbers can swing from one month to the next, depending on when we buy certain staples, nevertheless, this is always a good lesson in how economical plant-based food can be. Meat is expensive, even while it is heavily subsidized.


Posted by RogierFvV at 4:21 PM No comments: