Inspiration at Neerob on Nutrition and Health

The other day (10/9/18) we had a Dinner for Doctors at Neerob Restaurant with a mixed group of doctors, medical organizations, other medical professionals and general audience.

Neerob put on one spectacular plant-based dinner with a choice of four different salads, followed by a main dish of rice and two vegetable dishes and a sauce based on lentils, which is always delicious. In other words, it was a world-class plant-based dinner and a marvellous display of the flexibility and experience of Neerob Restaurant.

There was a lot of information distributed, on the American College of Lifestyle Physicians, which provides a way for doctors to get certified in this new specialty which revolves around prevention above all and lifestyle choices as the means, including diet, exercise, rest, relaxation, and so on.

I provided some information on Plant Pure Communities, the not for profit support group for the whole foods, plant-based diet of which I am the Group Leader for the Bronx. Our Facebook group is:
https://www.facebook.com/groups/PPCDaBronxPod/ 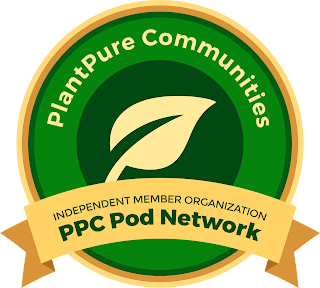 We also provided some brief information on the 2nd Annual Montefiore Preventive Cardiology Conference, which took place the Saturday before, 10/6. After that, we proceeded with the speakers, starting with the keynote speaker for the evening, Dr. Sharon Wasserstrom, who is the first ACLM certified doctor in the Bronx, and she practices at the Montefiore clinic at 2300 Westchester Avenue... but she is going to move to Florida at the end of the year.
Dr. Wasserstrom gave a very insightful short introduction about the whole foods plant-based diet and its role in medicine, starting from the point of view that medicine became the victime of its own success based on the tremendous progress in modern times in the treatment of infectious disease, but then tried to deal with chronic illness in the same vein. However, most of the chronic diseases we are struggling with, high bloodpressure, diabetes, heart disease, cancer, on and on are primarily the result of diet, and diet should be the first means of addressing them and this is where the whole foods, plant-based diet comes in as the optimal human nutrition.
Dr. Wasserstrom presented three case histories for a Bangladeshi, a black person and a white patient, including the ups and downs, depending on how well the patients followed the diet. The results are very quick, so with a little reinforcement, people are usually motivated to continue. In most cases, it works better than medication and it has no side effects, and in the short term a physician can always assist with medication, although the levels of prescriptions may have to be adjusted quickly.

Then we had some testimonials, first from Moh. Islam, a Bangladeshi nurse from Elmhurst Hospital who had a bad heart problem (95% blockage of one coronary artery), at age 36 and had a stent put in, but after trying several cardiologists he ended up working with Dr. Robert Ostfeld at the Montefiore Cardiac Wellness Program. His words were from the heart, and he explained how the genetic makeup of Southeast Asians pre-disposes them to heart disease, because their arteries are typically narrower than Westerners, so they block up easier. Another Bangladeshi person in the room chimed in that he had a heart attack at age 36. Mr. Islam ended with a powerful appeal to his Bangladeshi brothers to take care of business, starting with a Whole Foods, Plant-Based diet.

After Mr. Islam, Father David Powers of St. Helena's shared some of his experience with a fair dose of self-deprecating humor. In a different way his story is also impressive, having lost about 100 lbs since he started on the diet and feeling better.

Lastly, Angela Vita, the retail dietitian from the ShopRite at Bruckner Commons gave us a run down on shopping for a whole foods, plant-based diet at ShopRite, complete with a flyer that provides a directory to the store. Also, she announced an upcoming cooking demonstration at the store, in collaboration of CB#9 with Plant Pure Communities on 10/27 at noon.

As a general announcement, we also shared that on 10/20 we have a new Plant-Based cooking class at St. Helena's. 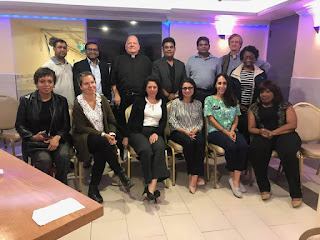 It was clear that sparks of inspiration were flying, and we are planning a new "dinner for doctors" to follow-up on this one in the spring, hopefully coinciding with Neerob obtaining a certification of (part of) their menu from Plant Pure Communities and from Plantricious as well.

Posted by RogierFvV at 7:22 PM