Ok, here is yet one more variation. Small Red Beans are often used in similar ways as Pinto Beans and Red Kidney Beans, though they taste quite different, so this attempt will introduce a 5th variety of bean in our lineup. By now, I am convinced that this basic recipe is quite flexible and brings out the natural aroma of the beans, so much so that the differences in flavor are merely interesting, and not at all "right" or "wrong." For me personally, the process of this recipe development has led me well past my mother's cooking. No longer am I trying that ever elusive idea of re-creating the flavor of my youth, it is now merely an interesting exercise to try and improve on the last version, but they're simply all good. 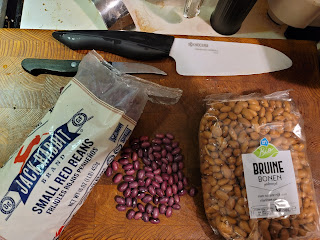 One other new element that I am introducing in this version is Fennel seed (aka. Anise seed), which supposedly also helps with the digestibility of beans, but evidently also tastes good, and this will set me on a new course to make this soup even more aromatic. Along with it, I also added Basil, Cloves, and Oregano, creating a deeper and more complex aroma.

Based on today's results, here are my up to date ratings for the different beans in this style soup. Meanwhile I note that the differences are so slight, that I honestly can say I like all of them, and I feel inspired to keep trying more different bean varieties, and appreciate the differences. Meanwhile, it is clear to me that different people have different tastes, and getting the ratings has been very confusing. Just today someone told me that they liked Pinto beans best, whereas I put them near the bottom of the list. So trying to make sense of people's tastes is nearly hopeless, though I try to figure out what it was they liked or did not like.

The purpose of this recipe was to make a comparison of the taste of different beans, based purely on keeping everything else the same.
I am trying red kidney beans, pinto beans, roman/borlotti/Cranberry beans, Small Red Beans and even bruine bonen from Holland.
Also take note of the site https://bruinebonensoep.com

Source: somehow, this is the recipe I started from:
https://www.thedutchtable.com/search/label/Bruine%20Bonensoep%20%28Dutch%20Brown%20Bean%20Soup%29

1 leek, washed and sliced fine
1 cup of eddo.
3 stalks of celery, including leaves
2-3 red skin potatoes, washed and diced,
2-3 carrots peeled & diced
other root vegetables as might be around, turnips, parsnips, celeriac root etc.
2 tomatoes, or a 15- Oz can of diced tomatoes
2 quarts of veggie broth, or water with Vegetable Better Than Bouillon or similar. More water as needed.
3 bay leaves
3 cloves
3 sprigs of thyme, fresh if you can, or 1 tsp dried thyme
1 tsp basil
1 tsp oregano
1 tbsp of either miso or gochujang at the end to finish the taste mild with miso or hot with gochujang

Posted by RogierFvV at 5:51 AM