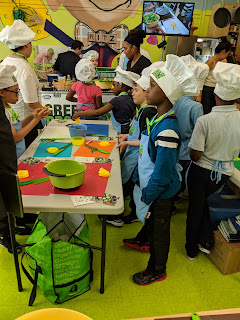 I went to visit the Green Bronx Machine with Father David Powers from St. Helena on 5/23. It is the project of Stephen Ritz at P.S. 55 at St. Paul's Place in the South Bronx.


Here is a TEDx Presentation on the Green Bronx Machine.

We attended a whole afternoon of presentations, mostly by the kids, with some assistance, on growing the veggies and the herbs, on their experiments with different kinds of lighting (LEDs won over fluorescents) and the whole array of related teaching that goes into this wonderful program at the intersection of health and nutrition, as well as science, literacy and math, not to mention presentation skills and so on. The poise of these third graders was amazing, for there were almost a dozen adult onlookers present, but they did their thing and were quite unflappable.

I had one interesting conversation with a few people from Memorial Sloan Kettering (MSK), which has a program going on where the GBM contributes fresh veggies to recovering cancer patients, and I was told that the hospital can already see the difference in terms of better outcomes. This is quite encouraging, since MSK has otherwise been a laggard in terms of the plant-based revolution. I recently got to see this up-close with a relative who was treated there and I was apalled at the fact that they still do not cover the Whole Foods, Plant-Based (#WFPB) nutritional paradigm and instead they stick to the traditional ideas of nutrition that reflect the infamous "My Plate" recommendations from USDA/HHS, which are hopelessly obsolete.

Fortunately, there are already programs for cancer patients that do focus on whole foods plant-based nutrition as this report from California shows. And then there is always Chris Wark and his website, ChrisBeatCancer.com. Both Kaiser Permanente, the largest health system in the country, and now also BlueShield of California support the whole foods, plant-based diet and are bringing it more and more into their clinical practice. Perhaps it's just slower to come to the East Coast.

Seeds to Plants to Food

And at one end of the room a group did a presentation on their research into the various kinds of lighting. The project was quite in depth and tracked the performance over quite some time, and the overall conclusion was that they had much better growth with LEDs than with fluorescents.
Meanwhile, teach Stephen Ritz was everywhere, both helping the kids, and educating the adults in terms of what they were looking at.

The food was an excellent little salad, as well as steamed veggie dumplings. The adults were running around in between all the work going on.
At the end we got to see a new film of the operation that was made by a high school senior for their graduation project. More local talent at work. In all, a very inspiring afternoon, and quite an education about education on a whole new level.

Posted by RogierFvV at 6:59 PM