Some Travel notes... Angola and UAE

Ok, so I went to visit my adoptive son Didi in Angola, and here are some notes on my food adventures.

Emirates airlines, they had some reasonable vegan meals, but a bit inconsistent, because like most in the hospitality industry, they are clueless about nutrition. So I wrote to them. I had brought along some baggies of kale with sweet potato, with my usual mustard seeds and balsamic vinegar and that kind of supplemented my food during the journey. Because vinegar is a good preservative, some of it made it all the way to the fridge in my hotel in Luanda and lasted another two days.

Hotel Diamante at Luanda. L loved the very central location of the hotel, and what's more the food was not bad. Particularly the breakfast, which was perhaps my most important meal. There was a greengrocer (Casa de Frescos) around the corner on Av. 4 de Fevereiro, where I could get some rice cakes, and any extra fruit if I wanted. They also had stuff like brown rice and whole wheat pasta, so clearly there is some budding interest, but overall the selection is limited when you go out.
For breakfast there was an extensive selection of fruit, melon, papaya, banana, on and on, so I would get myself a huge fruit plate, and then there was a very good quality of course multigrain bread and always sautéed vegetables (probably onions, and chard, or collard greens). They were not too greasy, although for me any grease is too much, I hate it any more, but these were passably good. The whole thing made for a substantial and quite acceptable breakfast.

DIY. During the week, my friend became curious about my food habits, so one day we went to the supermarket, and I made a meal at lunch time. Here's what I made - and I started with a mixture of caramelized onions with garlic and some chilis as a foundation for three veggie dishes, plus, I cooked some sweet potatoes. Here were the other dishes:
Primitive, but not bad, and again the leftovers went into freezer bags and on towards my hotel fridge, and with some rice cakes from around the corner, I could have a nice veggie snack at any time for the last few days.

I don't really remember the name of all the restaurants, but there was one very nice place on the beach, Coconuts, described as "vegetarian friendly," and I would agree. Here is a picture of the view to the beach on the inland bay on the Ilha do Mussulo: 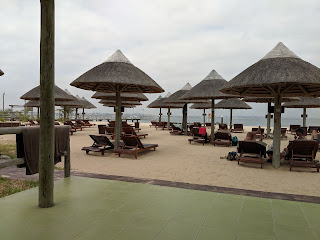 Generally speaking, the way I got by, was this (note that I had been instructed by an infectious disease doctor not to eat salads and only the kind of fruit that you can peel): I managed to explain that I wanted mixed vegetables but cooked without oil, and then I combined it with either potatoes, sweet potatoes, or pasta. It was beyond me to explain how to caramelize onions without oil, but there was generally some onions and tomato in the mix. Sometimes I specified some tomatoes and some garlic. Herbs and spices too hard to explain, but I often resorted to balsamic vinegar. Forget whole wheat pasta of course, or brown rice. As noted, I could get those at the grocery store, but that was not a battle worth having at a restaurant. The most upscale place we tried, Pimms - supposedly one of the fanciest restaurants in the city, which was also written up as also 'vegan friendly,' disappointed the most. They tried, but the result was mediocre, for twice the price.

UAE, Le Meridien Dubai Hotel & Conference Center. Arriving at the airport at 5 AM and at the hotel before 6 AM, before any room would be ready, the only thing that mattered was breakfast, and the selection was extensive, not to say overwhelming, but still slanted in favor of heart attack food. So, it was still not easy. Fruit was easy. I found a quinoa salad that was not too bad, and something like Tabouleh. With a little combining I managed to end up with a nice leisurely breakfast, and time to wait until my room was ready.

Dinner with a friend as a local restaurant in  Ras Al Khaima found me a buffet dinner, and although they looked at me weird when I began to explain about no oil, no meat, etc., it turned out that once I started exploring it was not too bad at all, and I managed to survive.

I had a great trip, but I was happy to be back in my very own food paradise in little Bangladesh on Starling Avenue.